Haiiiiih....time flies like nobody business! I always ask myself, what have I done? Tik tok tik tok....Nothing much actually (except for diligently being a moo-moo cow for the past 7mth down the road serving my 2 lil fella) but time is always not enough for me. Not that I'm super busy in the office (thank God!) BUT a new CEO came in lately  +_+ therefore....I am busy now (oh God!), and that makes my blog covers with spider web, untouched for almost a month. I have so many rubbish things to write actually. Everything is in que now, till I don't know where and which topic to start. And I've got sooo many photo to be edited and uploaded here. My Sabah trip lah, YY's milestone lah, YY's skin issue lah, QQ's silly update lah, Father's Day celebration lah, etc etc.... All no time to update, cum M.A.L.A.S is part of the reason as well.
Anyway, this should be a very short update (minus the above long intro) So, I met Teacher Nel couple of weeks ago for QQ's first half year performance review. Fuuuh...I tell 'ya, it was just like yesterday I met Teacher Nel for the same matter. Now I did it again.

It's funny to meet my ex-school mate to get feedback about my own child's academic performance in the pre-school. Never thought this could happen. Hahaha. And of course, it was a very relax and happy moment with Teacher Nel coz we were not only talking about QQ though. Kepoh a bit of other student's (and some silly feedback from other parents) performance lah :P Not back-stabbing lah Ok. Info sharing sahaja =)
Overall, I am satisfied with her performance this far. Teacher Nel commented that she pays attention to the teacher in the class, she follows teacher's instruction (and disregard mine all the time!!) and also a fast learner. But even if she doesn't perform very well, I will not force her either. She is just 3.5yo, she still has a looooong way to go in study. Knowing every single thing perfectly is not a good idea actually. My colleague shares with me that her son reads and writes very well in kindergarten. But when her son started Primary 1, he began to complaint the school work was boring. You see, the primary teaching will start from the scratch ie ABC and 123. That's the reason why the boy felt boring. I will feel the same too. 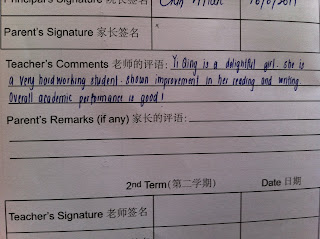 QQ's weakness lies on Mandarin and Bahasa Melayu. For Mandarin subject, she recognises words, quite a number of it. I'm so impress by her lah actually, knowing myself got no exposure on it at all coz I came from Convent Sentul ^_^ So now I'm literally learning Mandarin from my 3.5yo girl. To me, she champions it well as compare to myself! Hahahaha! Occasionally, I will buy some exercise book for her. Too many toys liao...enough of toys. So I would rather spend my money on coloring/exercise books instead, just to keep her occupied and to kill time on the weekend.
Currently the school is busy with daily concert rehearsal (Teacher Nel told me that she gotto train 80 different "species" LOL!) and QQ is very active and sporting in this matter. Guarantee my lil dancing queen can never failed to give full cooperation to the teachers lah. She keeps on performing part of her dance to me, and sing "and the turtle rock, Yeah Yeah!!" That's the loudest and most "understandable" part of her rehearsal so far :P