For the first time, I've demanded QQ to face the wall as punishment. When I said so, she immediately stood right in front of a wall. A very small pathetic wall which you can see in the below picture. Smart ha. 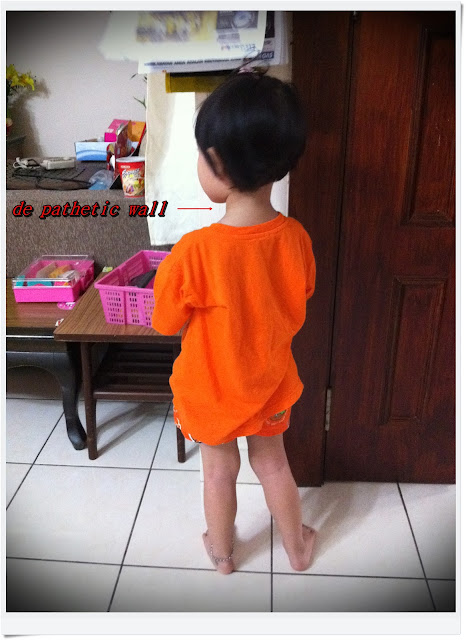 The drama is like this....when I carried YY upstairs for a quick bath, QQ followed me. After I was done with YY, I looked around for QQ and she was not at my sight. Fishy...fishy...she is not the duduk diam diam type. I've spotted her in Ah Yi's bathroom. She was doing something secretly there, and as I called out her name she got shocked and jumped up. I asked her what she did there, and she said "nothing". The more she said so, the more suspicious I felt. She left the place in seconds! I went to that bathroom to check things out.
First, I saw 2 tubes of toothpaste, both kena squeezed already. But surprisingly, there wasn't any toothpaste stain on the sink. She CAN'T be so hak hei, played so little toothpaste only? Cannot be lah. 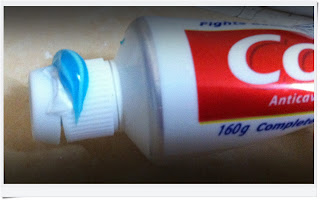 When I turned around....OMG....she had chosen to attack the toilet bowl instead. There was some toothpaste near the rim.Worst part was, she threw in some sotong crackers inside!! I took a toilet brush and tried to scoop them up for a closer look. Those brownish crackers became big and soggy (kembang due to contact with water) and they really really look like SH*T!! I wanted to take a picture of the disastrous-looking toilet bowl, but I couldn't coz from the look at it, I had stomach upset de. Hahahaha!! I quickly clean up the toilet bowl and tapao all the soggy crackers, and I flushed the toilet. I washed my hand and I think God made me turn around again for the 2nd time. With the clear water in the toilet bowl, there were more to be discovered.
The toilet bowl has turned into a wishing well. See, so many coins down there, with more toothpaste! Duh....although the water is consider clean, but I can't put my naked hand into it to remove those coins. I covered my hand with a plastic bag first before I do the collection. 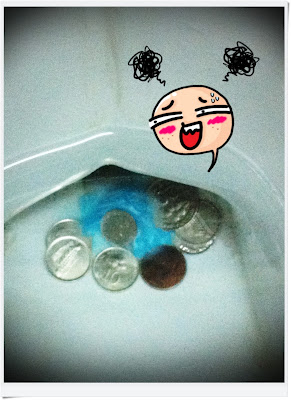 Of course, QQ get lots of scolding from me. She cried badly when I asked her to face the wall. While she faced the wall, I sat opposite her to BF YY. She cried louder and louder but I just ignore her. Then she apologized to me repeatedly. I gave her my killer look and she turned back to the wall :P She continued to cry cry cry....then I peeped on her. It was crocodile tears!! She was facing the wall, gave me her fake cry and fake sobbing, and she was playing with the wall. Her little fingers were digging the side of the wall!!! She saw me peeping on her and she stopped immediately. She then apologize and said "har chi ng kam" (next time don't dare to do it again). Dear, I've heard this for x-amount of time already. Kinda immune to your pledge lah.
From that incident, whenever she started to drive me up the wall, I will always ask her "want to face the wall?", she would tame back a bit. Don't know how long can use this trick to stop her from  doing all the blood boiling stunts.
BUT...that's not the end of the story. She had fever on that historical night +_+ Gosh...I felt so bad. Traumatized due to the punishment ka? In fact, when she was asleep, I had the feeling that she might get fever.  Mother instinct. I kept checking her temperature throughout the night. At 3.30am finally fever striked. Luckily her body temperature was not too high, the first thermometer reading was 37.7 degree. I gave her the fever syrup and fever subsided an hour later. The next day almost the same time around 3.20pm, mild fever revisit. I brought her to see Dr. Tan, and her throat was a bit swollen thus trigger the fever. So confirmed not due to the punishment lah.  I feel better de.... =)
Posted by Smelly Butt's Ama at 7:00 AM

WAHHH!!! Tak sangka wor. From the look of QQ gaga she looks so innocent. She will do all these stunts at home? I wonder what wishes she'd made to the 'wishing well' :P

that's y lah...don't judge a book by its cover lor =) she masks it perfectly rite ^_^ Her wishes must be " I want money, so many so many money". That's what she normally says lah. semua pun mau so many so many!!

those little things she did make you go 'mad' but it will become 'sweet memory' when she has grown up. She is a cute little angel.

Yeah! That's why must pen down every single 'drama' so that I can show to her in future =)

Haha, I had to smile when I read this...Children with their dramas ;). One reason why I think I am not ready yet to have one ;).

hehe..face wall wor!! first time i hear this. today, instead of locking my boys inside the room, i locked myself in while they are crying outside. perhaps can try ask them facing the wall next round!

haha it's an "in" thing in kindy :P cannot smack or scold too much in kindy ma, so all the teachers can do is "allocate" each of them a wall as punishment. You remember to allocate a wall for each of your boys k! according to the teacher, if u ask the children to face 1 same wall, they are delighted to do so! lagi happy! and it's funny to read that you locked yourself in the room instead of the crying boys. LOL!!