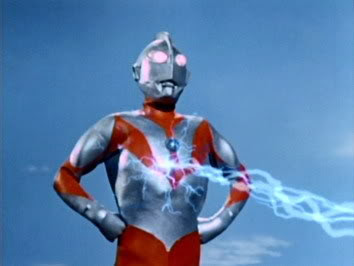 This electrifying scene fascinates her very much!

Smellybutt catches the Ultraman bug and it's been 2 weeks++ already, yet she's still so into it every single day. Screening time in her very own private cinema is 5-7pm on weekday. On weekend, if we are not at home, then the DVD player can have a break. Otherwise, same time same place =)
She has practically memorized each scene - when will Ultraman lifts up the monster a.k.a. "chew sao" and throws it away, when will Ultraman activates his electric current directly from his chest to attack the monster, and so on. 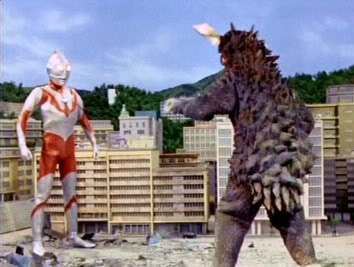 Once Ultraman has kao tim the monster (blasts it into bit and pieces!) Ultraman will then fly up high....far far away.....infinitely in the sky. That's the moment where my lil ultra girl will scream for him with high pitch "Ultraman don't go (3x) !! Ultraman come back (3x)!!! Whuuaaa whhuuaaa whuaaaaa!!!!!" and the live sobbing drama begins, from her. She'll definitely cry whenever Ultraman flies away after the battle. We have to console her....while rolling our eyes @_@

Most of the time, Dun Dun will have to (in another word, MUST) accompany her to watch it. Dun Dun will be her remote control. All she does is to give instruction to Dun Dun to fast forward the movie for no talking scene, no singing (before it starts, sure got play the Ultraman main song right) and to repeat the fighting scene all over again. This is exactly how she treated Barney And Friends VCD once upon a time. At least from Barney's show, she has learn a lot of English song and English words. But from this Ultraman VCD, she's now trying to learn to sing the main song which is in Japanese language! Sometimes I do try to sing with her as well, coz it's funny :P So we both ended up bantai the lyrics as we like, just ensure it sounds like what we heard from the VCD is enough =)

* above pictures downloaded from http://entertainment.webshots.com/album/11854267yKJNRqWtlk
Posted by Smelly Butt's Ama at 2:50 PM