Yesterday morning, I took time off from office to bring YY to the pediatric clinic for her jab.  She's weighing at 5.8kg (increased 200gm in a week) and 61cm tall. It was an overdue jab actually. Due to her phlegm attack during CNY, she has to postpone her 2nd month jab until she has recovered from it. She will turn 3 month old this Friday, and she yet to take her 2 month old jab! Erm...there was a miss communication lah. When we first brought her to see Dr. Tan for her phlegm problem, she was supposed to take her jab at that point of time. But Dr. Tan said to wait till she recovers first. I thought that she has to be FULLY recovered in order to take the jab. Last week, we brought YY to see him again as she has already finished her medicine and yet still having phlegm. Only then I realized, the moment we noticed YY had recovered a bit, we may have sent her in for the jab much earlier +_+
So yesterday, she had taken 2 jabs + 1 orally for Rotavirus. The total damage was.......RM551!!! I took the "better" one from Wyeth (13 in 1). And the best part was, they are now having promotion. Funny....injection also got promotion?? Buy 3 get 1 free. Hahaha! So for the 4th jab, I only need to pay Dr. Tan's consultation fee. Anyway, I can claim the medical bills from company, my entitlement is RM2,500/yr :)

When Dr. Tan poked in the first jab on YY's left thigh, she was steady, no crying. Wow, I turned to my mom and said "eh, not pain leh". But when Dr. Tan was about to poke her right thigh, YY screamed! So...it was a delay respond from her lah. She felt the pain actually :P She didn't really cry, just screamed a bit only and was back to normal within 5 seconds =)


In the afternoon, mom told me that she was very cranky and even refused to drink milk. She was very restless and wanted to be carried all the time. From morning till late evening, she didn't show any sign of fever.  When I reached home, I had been taking her temperature every hour, coz Dr. Tan has informed me that she might get fever due to the jabs. At around 8.30pm, I measured her temperature and the reading was 37.4 degree. Another 0.1 degree the thermometer will beep. Seemed like on the way to be feverish liao, so I gave her the fever medicine. The texture was quite thick, so it was not easy to feed her. I poured bit by bit onto a small spoon (got it from Baskin Robbins ice cream) and feed her few times, till she finished the 1.5ml dosage. She was OK when I breastfed her yesterday night, not cranky at all and even smile and laugh happily when I played with her.  Looks like she was looking for my 2 au de naturelle pacifier during my absent =) so she "protest" to her Popo the whole afternoon. 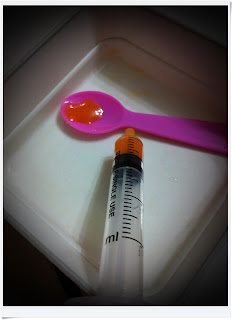 She didn't have fever throughout the night. Mom will keep monitoring her temperature today, hopefully no recurrent of fever lah.
Posted by Smelly Butt's Ama at 9:07 AM

your company is really good. pay for maternity and kids jabs. mine none. for me, kids insurance is subsidised. and if kids sick, normal gp fee only can claim. if i bring to paed..its on my own..

Ya lah, consider good rite. Even my friend who works in big MNC also can never enjoy this benefit :P