Battle of the week

Last week was the most traumatic week I've ever gone thru with Smellybutt (besides my delivery day 3 years ago lah). She was down with flu, cough with phlegm and high fever. In total, I only slept for 3 hours for 4 days in a row +_+ Imagine a preggie zombie in de house and office...

Whenever she started to cough, I've gotto get up immediately, grabbed this small container and hold it in front of her just in case she cough too hard until she puke, which she did. Luckily I've managed to catch her "fountain output" on time previously. 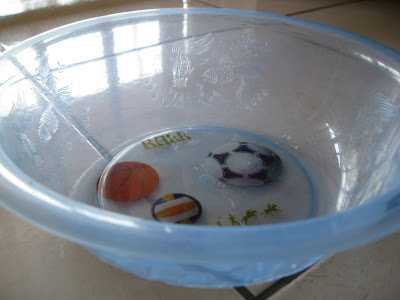 Due to her illnesses, she has not been eating well. In 4 days, she only took 6oz of milk once and 3 slices of bread. That was it. No other food went into her mouth. Makan ubat more than nasi! As a result of this, she loose 1kg - her golden kilogram! Now she's only weighing at 10kg =( Even to feed her bread also I need to do extra, by using the cartoon bread cutter to make it look more tasty! Here's the mickey mouse head and cloud design bread I've made for her. Aaah..with these cute cut out design, she can take 2-3 slices of bread with butter and blueberry jam spread. 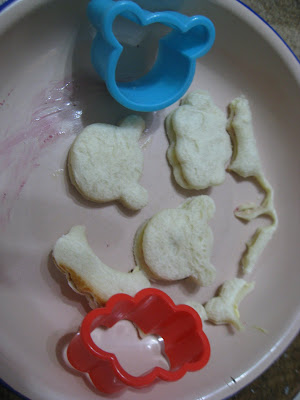 It all began on 17th Aug (Tuesday) @ 4am, her body temperature reading was 37.6 degree, not too serious though. Gave her fever medicine and fever subsided an hour later. On the same day at 4pm, another round of fever again. Same lah, gave her medicine and then Ok liao.

Dr. Tan has always prescribed Smellybutt with 2 types of fever medicine, and he named it A and B. Medicine A is for mild fever with temperature measuring between 37.5 to 38.4 degree. It can last for 4-6 hours. Whereas Medicine B is stronger thus it is meant for high fever with temperature measuring from 38.5 degree and above. It can last for 6-8 hours. This B is the same as the fever drug which is administered rectally for even shorter period of recovery. I need to know when is the right time to use both A and B and need to calculate the timing correctly too. Medicine B can only be taken again after at least 6 hour from the 1st dose. Whereas medicine A can be taken every 4 hour if the temperature remains below 38.4 degree.

These bottles of drug syrup are really an eye sore to me. I really miss those days where she stayed healthy with tip top condition for at least the first 17 months of her life - no cough, no phlegm, no flu. Her very first fever was a week before we fly to Guangzhao with her. She was 17mth old when we first travel with her by air plane. 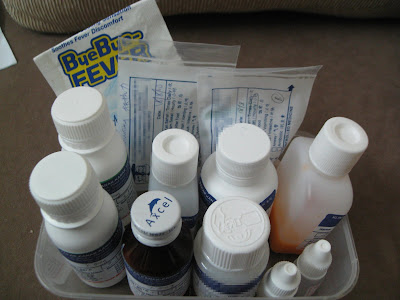 See the below record of her endless stubborn fever attack.... 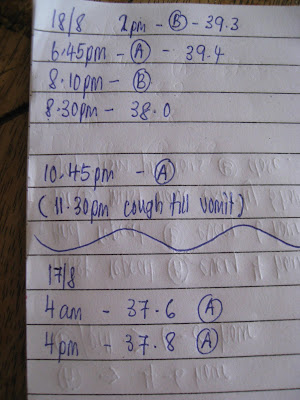 And the saga continued.... 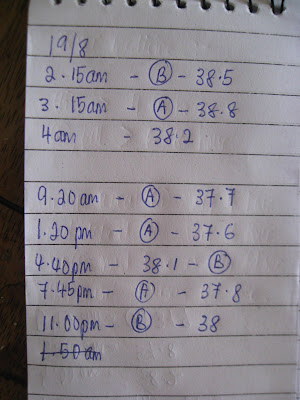 On 20th Aug (Friday), we thought that the fever has finally stopped 2 hour after the 5.45am attack. Unfortunately, she had fever again at around 5.30pm, and then prolonged until 7pm. Her body temperature was still 38.4 degree. We had to bring her back to Dr. Tan for further check up, and also planned to get her a round of Nebulizer treatment. She coughed badly which disrupted her sleep at night. During initial visit, Dr. Tan informed that we can still monitor her condition and need not put her on any antibiotic.

So on Friday night visit to Dr. Tan, it was another scary moment for all of us. As soon as I told Dr. Tan that her fever never seemed to end for 3 days non stop, Dr. Tan said "I will perform H1N1 test on her now". What??? H1N1 test?? Waaaahh...I couldn't believe it. I though that he would suspect her for dengue fever. Mana tau, H1N1 pulak yang disebut @_@ The test was pretty simple, just need to get some hingus sample from Smellybutt's nose. Dr. Tan took out a sterilized cotton-bud-look-alike thingy (but this 1 was slightly longer and thinner than the normal cotton bud) and prepared some clear liquid on a mini tabung uji. I had to let Smellybutt sat on my hips so that I can hold her hand tightly. Before the process begin, Dr. Tan offered her 2 pieces of cartoon stickers, just to let her hold on to something and not focusing on the nose digging process. While digging her tiny nose, Dr. Tan said "waaaa...your bei-si very hard oooo". LOL!!! I was laughing all the way and Smellybutt stayed calm too. When he removed the cotton bud from her nose, alamak! couldn't get any hingus sample! Actually her running nose was about to dry up. No choice but to dig her nose for 2nd time. This round, the nurse came in and held her head. Dr. Tan had to insert the cotton bud way deeper to reach the left over hingus in her nose! Eeeww...I knew it was painful and scary. Smellybutt couldn't stand it anymore, she started to scream and cried, and wanted to get out from the seat too +_+ Drama lasted for about 10 seconds and Smellybutt stopped crying the moment Dr. Tan removed the cotton bud from her nose. We were told that result would be out in 5-10mins. So fast ar?? 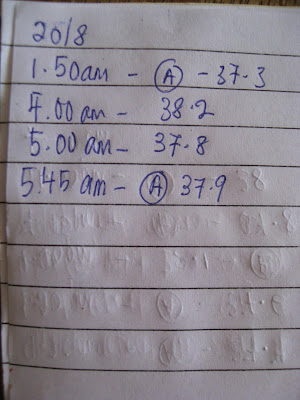 See the happy Smellybutt right after the nose digging drama....very proud with the stickers! While waiting for her turn for the Nebulizer treatment, she posed for my camera =) She even said to me "mami, I got 2 sticker from doctor. other kor kor jie jie don't have ke wor". Muahahahaha! Ya ya, you got it exclusively lor :P 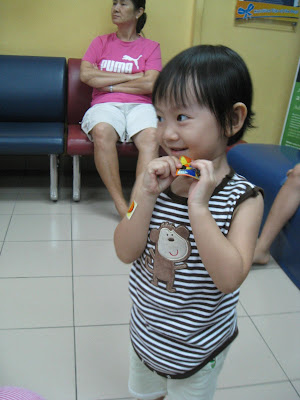 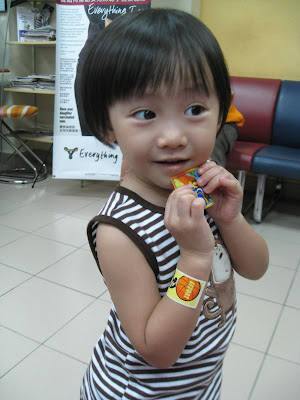 My heart was pounding pretty fast while waiting for the H1N1 test result. Wait and wait....finally the result was out - NO H1N1. Pheeeewwww....thank God! Still, it was an unexplained fever attack. Maybe I had accidentally passed the virus to her when I was coughing badly a week before =( On that Friday night, Dr. Tan has prescribed her with antibiotic. Finally, she has to take it. You know lah, in a way antibiotic is also bad for our body too. So if can avoid it, the best lor.
Her fever continued at 9.30pm on the same night, and then it went off 2 hours later after her medicine A + 1st dose of antibiotic. Miraculously, her fever has totally gone after taken those 2 medicines that night. In fact, my MIL also knew about Smellybutt's condition, thus she did some prayer for her on Friday. Prayer means, to seek for God's advise what has caused her to be so ill. According to my MIL, apparently the root cause was due to some "dirty thing" kacau-ing Smellybutt. So coincidentally, Smellybutt was fully recovered on Friday night. Hmm....I really can't tell which "method" has actually stopped her illnesses - the antibiotic or the prayer? But no matter what, most importantly Smellybutt has recovered lah.

Glad that she was back to her pre-school this Monday...meaning that she will eat again! Or rather HAVE to eat again. Hahahaha. In her pre-school, she will definitely finish her meal and her 80z of milk in the morning, whereas at home, she will dilly dally and find excuses not to eat. If I ask her want to have ice cream or Vitagen or not, she'll scream her answer YES!! See, she has appetite for these 2 luxurious food, but when ask her to join us for dinner, she'll say "mami I'm full already". Oh yeah...mami is full too, FULL OF ANGER! Let's eat Ok!

Thank God she is well now...