Last Saturday, I had a great time cathing up with many of my relatives from Bentong, Pahang. My parents were born in Bentong. Some of my mom's siblings have moved to KL for many years too. We all met up during a wedding banquet held at Hei Loi Tan Restaurant in Puchong.

Pic #1 - The man in lime green shirt is my my uncle together with his wife and children. He's my mother's eldest brother. They are well known for the home made kaya puff (kayeng-kok) in Bentong. Anyone tasted the Bentong Moki Home Made Kaya Puff before? It is really delicious. They made the kaya by them self and that is really a hard work and time consuming too. Apart from kaya, they also have pineapple flavour as well which is equally yummy! It is just an hour drive to Bentong. So if you happen to be there, do drop by at Bentong morning market and look for the mini stall next to a sugar cane stall in front of the covered wet market building. Anyway, just ask anyone about Bentong Home Made Kaya Puff and you will be directed to the stall. Nobody would not know this delicious kaya puff lah! 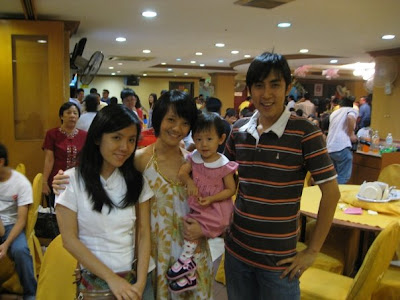 Pic #2 - Together with my cousins. The lady in white is my uncle's eldest daughter and the far right is his younger son, who is as tall as a tiang lampu lah wei... 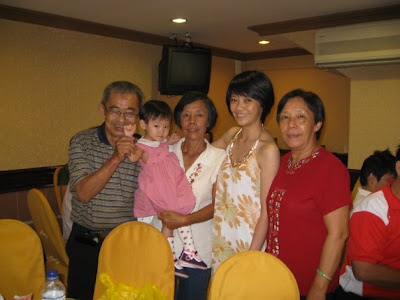 Pic #3 - The lady in white next to me is my mom's youngest sister, together with her husband. My aunty is the owner of the mini stall in the Bentong morning market. She helps my uncle to sell the kaya puff.

Unfortunately I don't have a picture of the kaya puff with me. Normally we'll order a box of it when we are back there. My sister's ex colleagues love it very much. She'll take order from them and inform my uncle a day before we travel back. My uncle will bake the fresh kaya puff for my sister to deliver to her ex colleagues. 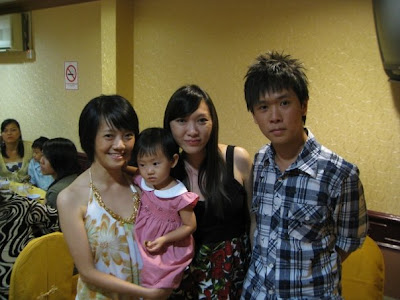 Pic #4 - Another cousin of mine, Vivian. She has completed her Uni in KL and been working here for 3yrs already. That's her youngest brother, who's still studying in Bentong. We've just met each other in Facebook recently. All this while we've lost contact with each other. When we were younger (she's just 3yrs younger than me) we used to write letter to each other. That time she was still in Bentong. Now....MSN will do :) 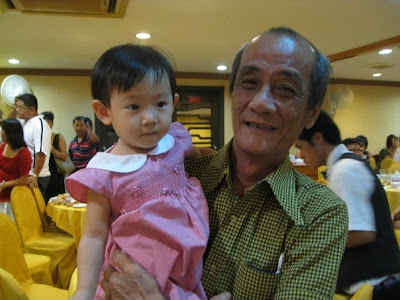 Pic #5 - Ok, this is the amazing part. Smellybutt met my uncle 1mth ago in KL. He and his wife came down for a wedding banquet as well. She met him once only. And to my suprise, she "willings" to call him uncle and let him carries her and walk away out of my sight! I don't know why this could happen lah. She will not allow strangers to carry her. Well, even though she meets my KL cousins more often than these Bentong relatives, she still refused to let them carry her, or even look at them too!