This is not just a red nose reindeer, it is a whole red reindeer :) 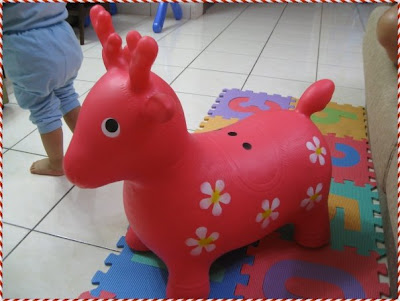 Finally Smellybutt owns it already. I bought it from an online store. Actually I bought 3 of it in total. 1 for Smellybutt and the other 2 for her lil cousin sisters in Ipoh and Melaka.
The moment she saw it, she was so excited. At first, I was just filling air into the red one. Then she saw the blue one and she wanted it too. Haiih...she was bugging me very hard for the blue one, so I got to pump in air for both.
She had a hard time to decide which one to take. Of course she wanted both, but I told her that we need to give one of it to her lil cousin sister too. She nodded, and yet still refused to let go any of it! When HubB took away the blue one and put it into the car bonnet, she cried badly for it. Then we changed it with the red one. And she cried. And we exchanged it again, and she cried. Waaaaa...like that how? No choice lah, got to be hard on her. HubB just took away the blue one and ignore her cries. Poor Smellybutt. Cried badly also no use lah, cannot be so greedy. After a while, she was Ok already.
She couldn't bounce with it properly, so I've got to sit behind her and bounce it for her. As usual, she would say dun niao! dun niao! Hehehe, thanks to my feather weight body, else how to sit on it and bounce together with her leh.
But I believe that this bouncing deer is a great exercise, even for adult. When I sit on it and bounce it myself, I almost couldn't catch my breath after a few bounce. Felt so tired playing with it. Or was it due to my low stamina? Honestly, I hardly do any exercise except carrying her up and down the staircase :P 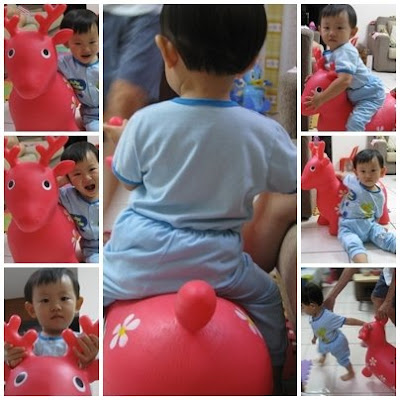 Smellybutt with the reindeer butt :) 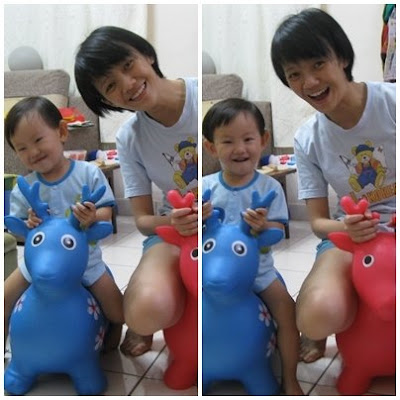 A picture of her happiness while having the 2 of them, before the disastrous cry! 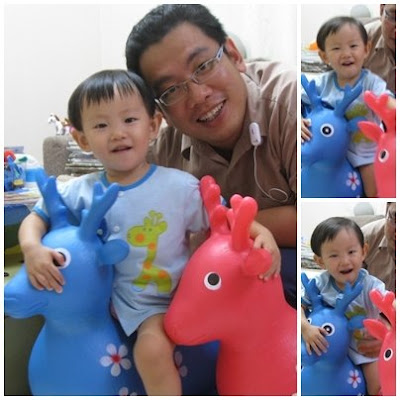