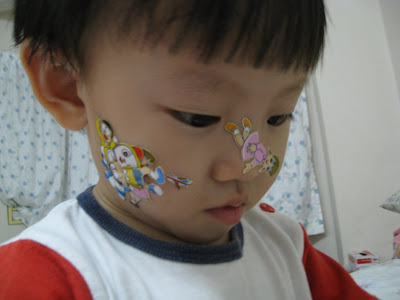 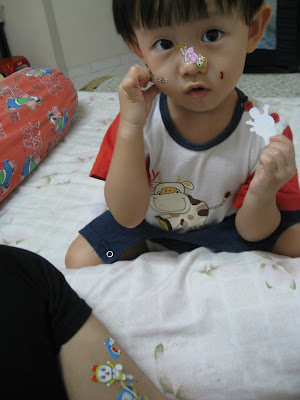 can see her right eye swayed to 1 side. Camera too close to her :P
I bought these Doraemon sticker quite sometime ago, as a bait. Hehehe...hoping that she will focus on these stickers and play with it while I feed her milk. Looks like playing alone with the stickers are not fun at all... 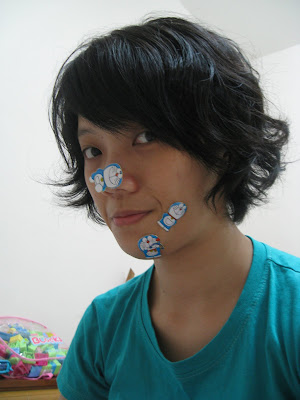 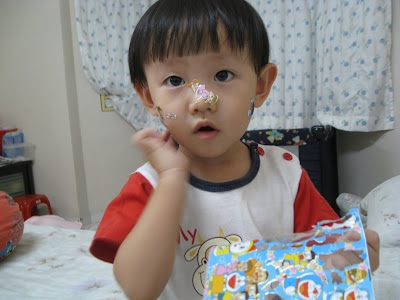 Here's the funny part. On 1 fine afternoon, while Popo trying to put her to bed for her afternoon nap, she refused to sleep and she kept talking and playing non stop. She saw this sticker and started to stick them on Popo's leg. Then Popo said to her while pointing at the stickers "QQ, Doraemon tired already. Why not you put it aside and sleep lah. Doraemon said, you better go to sleep now, later your Mama comes back will bring you to Desa Park to play ball". Just as Popo finished talking, guess what was Smellybutt's respond?
.
.
.
.
.
.
.
.
.
.

Muahahahhaha!!! Fantastic answer from her!!! Ya lah, the sticker cannot talk lah mom :) I told my friend about this incident. This friend of mine studies Montessori. She told me that, according to the Montessori, children will come to a stage where they cannot differentiate between the live and dead - human and object. Eg, if a boy accidentally knocks his head on a table, he will scold the table "why did you knock my head!", some will even hit back the table. So my friend told me that based on that incident, it shows that Smellybutt can distinguish between the 2 - human and object. She knows exactly that object can't speak. Hmm...my lil 2yr old achievement, not bad huh? I tested her again by asking her whether these items can talk or not. And her answer was still NO.
Then I asked her further.