If Smellybutt is able to kahtuik (spit) out her phlegm, she would have recovered much earlier. The phlegm medicine prescribed by the Pead was not too effective for her, even after 1 week taking it. My friend recommended me to let her try a Chinese medicine call "hou zhou san". It helps to melt/dissolve the thick phlegm so that she can spit it out easily, or rather puke out the phlegm. Sometimes the dissolved phlegm may come out together with poo poo too. 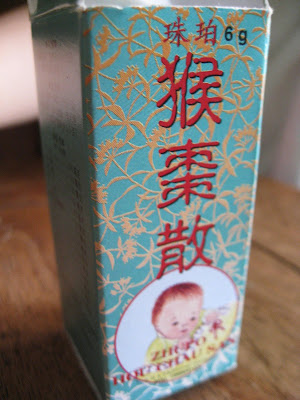 Hou Zhou San bought from Hai-O. "Hou" means monkey.
Fantastic fact about hou zhou san :-
This is something really amazing for me to find out the origin of hou zhou san. The name itself, "hou" means monkey. My dad told me that hou zhou san is made of the kidney stone found in the monkey's kidney!! Kidding or not?? Erm....I guess no joke lah coz that was what my grandfather told him. My grandfather used to be a Chinese sinseh, major in pile (hemorrhoid) treatment. 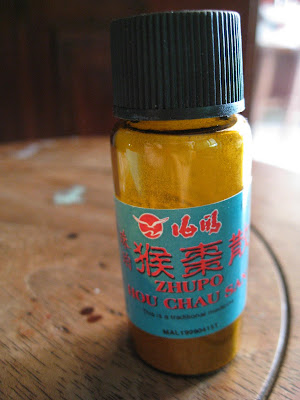 Just mix a small teaspoon of the hou zhou san powder with warm water will do. Taste a bit bitter though, but that is really sap sap sui (kacang saja!) for Smellybutt :) The powder in that bottle has combination of a few other ingredients too, 1 of it is pearl powder. Well, the rest of the ingredient, can't understand and recall.
After taking it for 3 days, we saw improvement on Smellybutt. The first time she spitted out the phlegm, the texture was quite melt down already. Then when she coughed again, I kept asking her to spit out the phlegm. Initially she refused but due to coughing too hard, she couldn't control it anymore and she puked! Everything inclusive of her dinner + milk too! EEwwwwww....luckily I was holding a handkerchief at that point of time, just to catch her phlegm ma. Didn't know I get a handful of output. After that incident, she didn't want to spit out the phlegm anymore. Sigh.....she still cough a bit with the phlegm tersumbat in her throat. 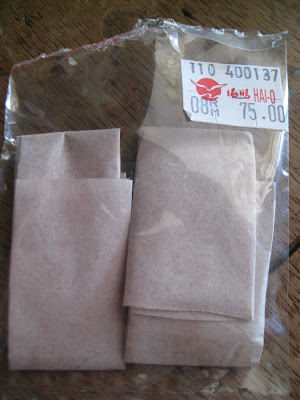 Then, my mom told me that the Hai-O personnel has informed her earlier that if we mix the pure hou zhou san together with those from the bottle, that way works better and can speed up recovery too. Check out the price of this pure hou zhou san....RM75 for a milligram!!! In Cantonese, the measurement refers to "yat fun", which is very very very little only. If you ever harchew in front of it, all gone by the wind immediately! So we have to handle it with TLC.

Actually the pure hou zhou san was quite kasar, not in powder form. So once I have paid for it, the guy will help me to pound it into very fine powder and pack it into 2. I need to feed Smellybutt with it twice a day only. 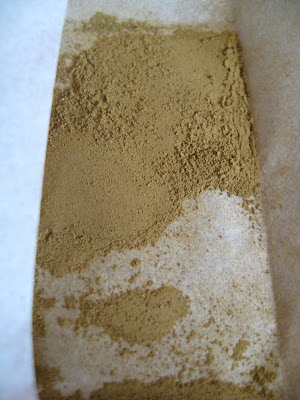 This is how it looks like, after pounding. The guy added 2 small tiny pearl on it too. I took extreme care on it while snapping this photo. Almost want to hold my breath...hahaha
And it's ready to serve.... 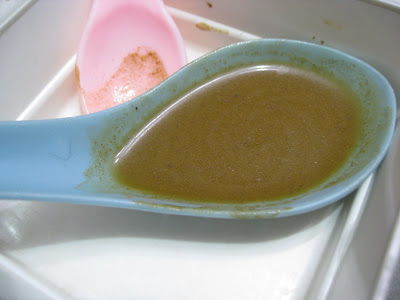 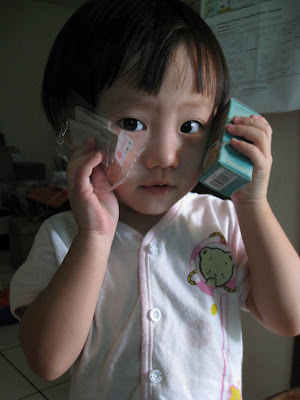 With this pure 1 milligram of hou zhou san, it works so well! She hardly cough too. I only hear her coughing once in the early morning and another time in the late evening. Cough lesser means I don't have to keep asking her to spit out the phlegm, and this is such a breeze for her and myself too. What you pay is what you get lah.
P/s : If you want to buy the pure hou zhou san, please get it from Hai-O instead from those normal Chinese medicine hall. Coz I went to a nearby Chinese medicine hall first to check out the price, see if it is cheaper than what Hai-O offers. The uncle said he's not selling it. He also warned me to be very careful when buying it, coz I will not be able to find out whether it is the pure hou zhou san or not. Hmm....very true. So I went back to Hai-O to purchase the pure hou zhou san. At least Hai-O is a big and reputable company....
Posted by Smelly Butt's Ama at 8:26 AM

I dare not feed my gals with Hao Joa San, so geli and I know my gals will surely puke them all out. So if my gals have phlegm, I'll bring them to the hospital to inhale the 'holy smoke'!

oo my colleague told me b4 that the 'holy smoke' really good, the phlegm will "disappear". betul ka? but QQ's Pead nv asked her to inhale it, so I didn't opt for it also. was it due to her age??

The price is cheap..I used to buy from Eu Yan Sang. my boy still do know how to spit yet. Sigh...we are coughing very badly now.

wish u both get well soon ya!!