Money Money Money...
It's so funny...
Syilings all over!
Aaahh...that's the version I sing for Smellybutt. Who doesn't like money lah? Even Smellybutt loves money too! Her first version of money was "muni muni" and that was just before she turns 1 year old. Slowly she has managed to say it pretty well and now very good lah - Money Money! She must say it twice. I don't know why. Tak sah if say it once, I guess.
HubB bought the KFC tabung collection for Smellybutt. No way man. I'm not going to let her use it. I guarantee she'll hold it for a second and it'll be drop dead ugly on the floor in split second. You see, hold it a second and drop it in split second. Can you imagine the speed? So...Popo bought her another tabung from Hinode Shop - the RM5 shop. It's a metal tabung. Huhuhu. What to do...she's ganas ma. 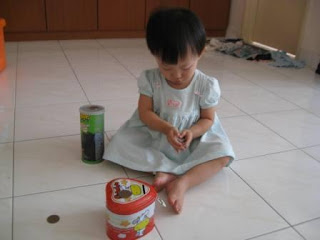 We taught her how to aim for the small and narrow hole on the tabung. She'll fill in the tabung everyday. Where did she get the coins? From Popo's drawer lah. Popo soaked the coins in the soap water (guna Lifebouy lagi!) and scrub them all. Smellybutt is too obsessed with the coins liao. That's why Popo clean it kao kao first. But of course we'll still wash her hands with soap after she's done with the coins. 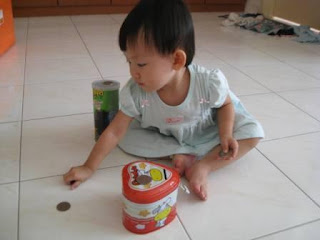 There were once she saw DunDun rushing to get some small change from a container under the coffee table. The roti man was honking his motobike and yelled ROTIIII!!! From then onwards, whenever she heard the roti man's honk pon pon pon...she'll be very excited and rush to the coffee table and say money money. We just pretend bodoh lah, doesn't want to reveal the "hiding place" of that money container. Konon lah hiding place. She just selak the table cloth with broad smile and took out the money container and say "money money...bao bao (bread)". Muahahaha. 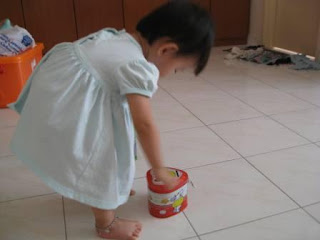