Last Saturday I brought Smellybutt to Ikano for dinner, together with my mom. Harvey Norman is having mega discount for electrical items, so my mom went to check out their stuff.
Smellybutt and I went to shop around at other shops. She saw some kids riding on those big animal 'car', those that you pay and ride on it for 3mins, I guess. It's not cheap actually. While Smellybutt was busy looking at the kids on the animal car and laughing happily with her hands movement holding the steering, I make an observation on parents who were making payment to a young man who operates that animal car service. The father handed over RM5 to the operator. Then the operator will insert a 20cent coin into the animal car to make it move. Am I kedekut or what?? I really find it expensive leh.
Smellbutt dah tak sabar and getting more excited with the animal car. She pointed at it and say "mama..chor chor..". She was trying to tell me that she wanted to sit on it. If she wants to sit on it, meaning I HAVE to sit on it too! Because her leg is not long enough to step on the accelerator. I saw a child riding on it with her father sitting behind her. Yeah, that animal car is big enough to support a child and an adult. So what's the problem of me sitting on it with my gal? NO PROBLEM at all for feather weight people like us. FYI...we both only weighing at about 52kg. Here's the breakdown for a laugh, me 43.9kg and Smellybutt 8kg. We are the forever-won't-put-on-weigh-duo. So.... don't want chor chor lah.... I can imagine my self sitting behind Smellybutt. I guess I'll look like a kakak (maid) if I do it "_". Side track a bit...there were once I brought my gal to a playground behind our house for morning walk. Then a small boy saw us, he came and say Hi to Smellybutt. The boy then asked me "where's her mama?". I answered him "I'm her mama lah". The boy laughed happily. Hmm..was that a compliment or what?? I think ar...to him, I was either a kakak or a tingkatan satu sister.
Back to Ikano. After a while, something else has diverted Smellybutt's attention. It was the trolley which came with a toy car has attracted her. Neh...those for rent type, where you pay RM2 for 2hr use with a deposit of refundable RM20. Ok, this one sounds so much more affordable for her to 'play' with. Here she is.... busy with the car steering. 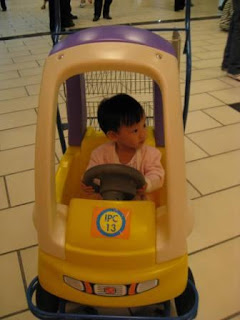 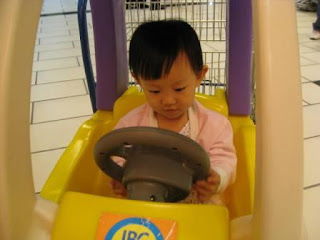 One little disasterous act took place when I was driving back home from Ikano. When I reached LDP, I looked at the clock on my car dashboard. Only then I realized the darkness on the speed meter. OMG!! I did not turn on my car light! I must have scared off other drivers on the road :P It was so bright in the Ikano basement car park. I've 'forgotten' that it was 9pm already, and I need to turn on my car light. Errr...long time didn't drive at night liao. Geezzz..getting older already, simple thing like that also can missed out one. YES I'm a year older today...my sweet 19+10 birthday!Woohuuu!!!!