Last Saturday, 2 October 2010, we had a wonderful pre-birthday celebration for 3 Octorian VIPs ~ Smellybutt, Dun Dun and my cousin's son at Sin Choi Wah Restaurant, Manjalara Kepong. Despite to the big crowd on weekend plus 2 wedding banquets on that day, we've managed to get a private room for ourselves (early booking).
My cousin sister went there earlier to decorate the room with some banners on the wall. She also bought plenty of helium balloons for the kids too. Boy, those helium balloons were so expensive! But once a year, never mind lah.
Here's the Baskin Robbins ice cream cake for Smellybutt. I've changed the design, due to budget constraint, coz I wanted to have a full ice cream cake instead of half chocolate cake + half ice cream. This 9" chocolate ice cream cake was sooooo delicious and just nice for 23 pax. There were 3 cakes in total, so after the candle blowing session, we all gasak the ice cream cake first before it melts.

But to cut this ice cream cake, really need full force and skill. After 3 birthday songs and helping Smellybutt to blow off the stubborn sparkling candles, the ice cream cake remained frozen and hard! In the end, the cake was cut into pieces with free size :P 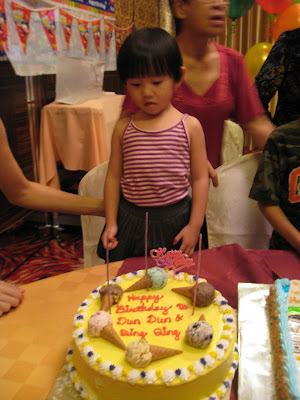 Here they are, the 2 mini superstar of the day....Smellybutt with the lil cousin brother in soldier tee =) 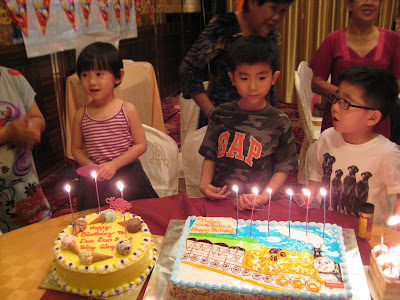 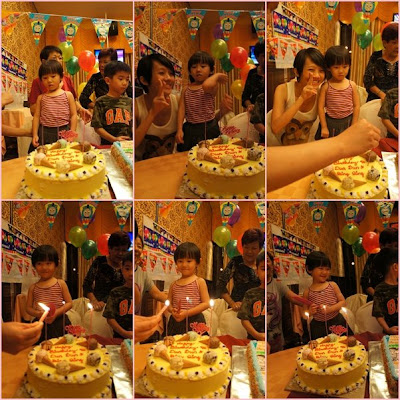 Smellybutt enjoyed herself so much, especially when blowing off the candles. My cousin bought special candles, where it sparkles the moment you lite it. And it was not easy for Smellybutt to blow it off. Better so, since she loves to blow candles so much! 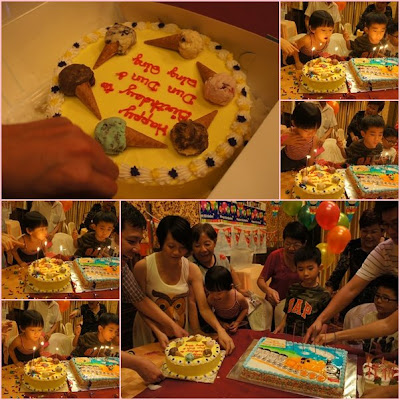 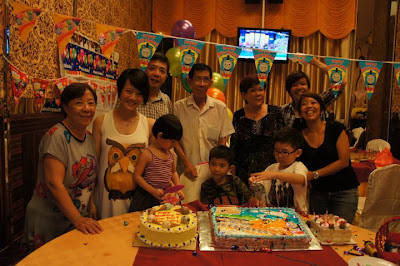 Smellybutt couldn't wait any longer and was bugging me to let her open her pressies. Actually, she knew what was it coz we bought a few presents together with her. My other cousins gave me their budget for their gifts to Smellybutt, and I kao tim myself what to buy for her. They have been cracking their heads when thinking what to buy. So, I let Smellybutt opened 1 present only while we were still in the restaurant. 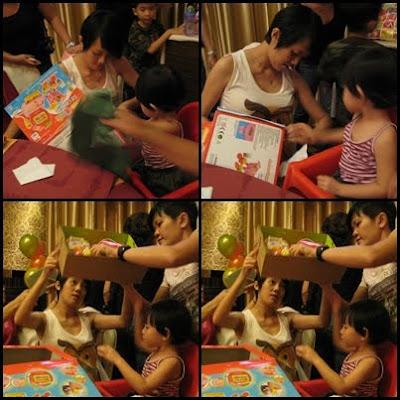 This is a cash register machine! Very cute and colorful! The moment Smellybutt opened it, her 2 other cousin brothers came to play together. 3 of them sticked to it for a good 15min. Notice the small change and notes? Geng hor! And even got receipt too, from the bear's head. It has a hand held scanner as well. The moment you press on it, there will be a beep sound. And when you press the open button, the cash tray will pop out with a "kaachingg" sound! I had fun playing with it also lah =) 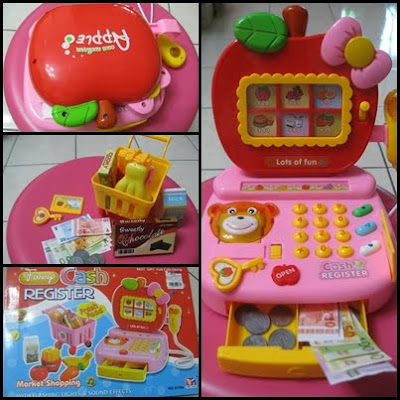 On the very next day, Smellybutt was asking for another present. Again, she also knew what would it be coz we bought it together with the cash register machine. 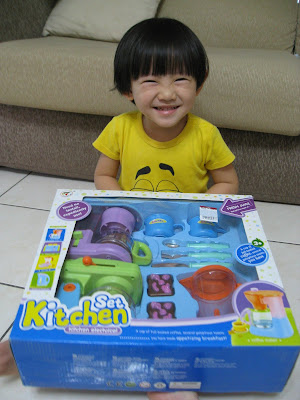 This is a kitchen set with juice blender, coffee maker and a cake mixer. For the coffee maker, I can play it with water too. But in the end, Smellybut pour water into all the containers! 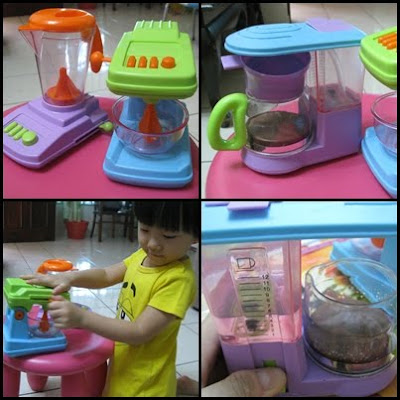 Stay tuned for the next celebration at her pre-school on the actual day. Also to celebrate with her beloved Baba also lah, coz last Saturday HubB was in overseas for work =(
Posted by Smelly Butt's Ama at 12:13 PM

look at the picture...she is super super happy le..

hehe Thx!! She is super duper happy that day!