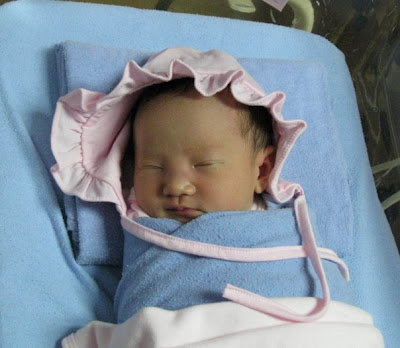 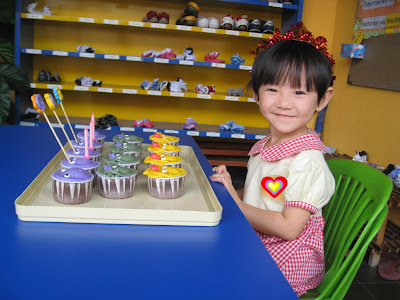 HubB, Popo, Dun Dun and I went to her pre-school this morning during their snack break for a mini birthday celebration with her. Upon arrival, I saw a big group of students, and I couldn't locate her at first glance! All in uniform, all almost same size when seated....so....my eyes also blur blur oredi :P Padahal, she was seated right in front of everyone else, coz she's the zhu kok today! Hahahaha.
HubB collected these cute cupcakes from my cousin sister's house this early morning. All fresh from the oven at 2.15am!! Poor cousin sister....she took the effort to bake for me even though she had to attend dinner yesterday night. 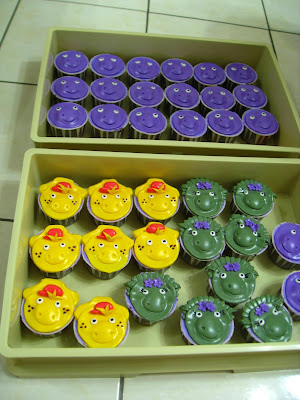 Up close of BJ =) This is the so called fondant design. No idea what is fondant lah :P Only know how to eat! 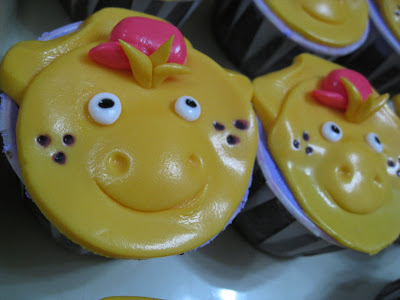 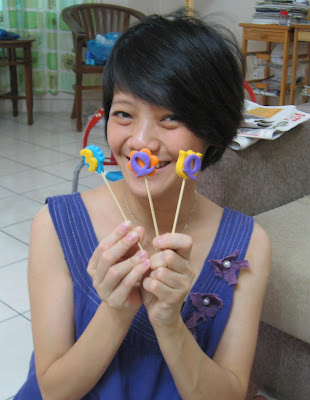 By 9.45am, we reached the pre-school along with the cupcakes and party packs. 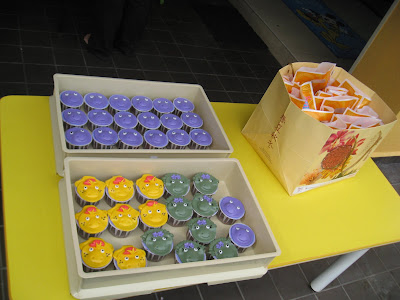 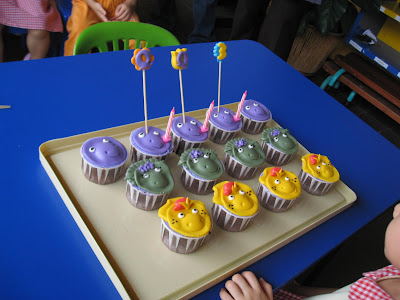 She just love the mini fondant on the stick so much, till she ate 2 of them. At first, I got so worried when I saw the big crowd this morning. I whispered to Teacher Nel that I've only prepared 20 bags of party pack and 36pcs of cupcakes (even though there's only 20 of them in Smellybutt's class). Teacher Nel quietly told me that she just get the 4yr old student to join in, just to make it more "yit lao" (more happening). She will settle with the 4yr old student makan makan later. But somehow, a 4yr old girl finally sobbing at the corner, for not having her share +_+ Teacher Nel said she'll distribute the remaining of the cupcakes to the 4yr old student later in the evening. If she only gave to that particular girl, the rest of the year 4 student will demand for it, and sure kelam kabut later. 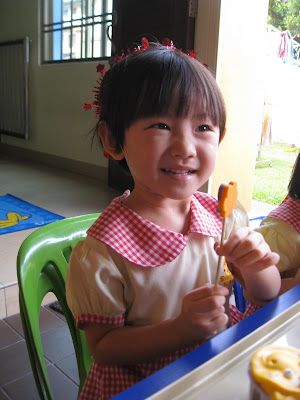 As soon as they have finished their cupcake + a bottle of Fernleaf Solivite cultured milk drink, Teacher Nel ushered the 4yr old student back to their classroom. Then Smellybutt started to give out the party pack to each of her classmate. 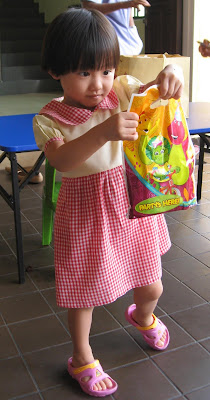 When all done, it was already 10.30am and I gotto leave, to go back to my office. As soon as 4 of us bid goodbye to her, her eyes became red color, teary.....kesian betul....I've already expected her to cry when we leave her. She must have thought that she may follow us back home after the party. Teacher Nel tried to distract her with other stuff, but she still looked back trying to escape :P In the end, Popo stayed back for a while, coz she sent her car for repair at the nearby car workshop. Don't know what happen after that...

Tonight, she'll get to open all her pressies. Will update more tomorrow.
Posted by Smelly Butt's Ama at 3:00 PM

OMG! The cup cake ho leng ar....
My son's one turn out so-so only. But I can see his happiness!!!heeheheh

I can see ur daughter's happiness also. Very happy.

ps: btw, when I left the kindy,he didnt teary..cos I used to psycho him already that I need go work..

thanks!!! not only the design was cute, the cake itself also very yummy ooo, still very fresh and moist!