Wanted to post this long time ago, but due the the size of the photos were too big (at least 5MB for each photo! coz HubB used his canggih HD camera +_+) I need time to re-size them. And now after re-sizing the photos, the quality is not so good pulak. Haaiii......
We have arrived at the Damansara Club House at 8.20am, as they need to have 1 round of rehearsal at 8.30am sharp. The event will kickoff at 9am. See....she was very happy with all other students. Smellybutt belongs to the Blue House. 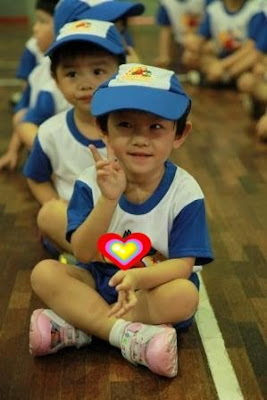 After the marching session, it was followed by Rukun Negara reading lead by a senior student, and then they all sang the Healthy Song with dance. The kiddos were all so cute with their action! And I just couldn't stop laughing while watching them marching and singing the Healthy Song with dancing. HubB has recorded all the 3 sessions, and the only voice over from the video was my loud laughter :P
Just before the 3yo sports game started, disaster striked! At first, I noticed Smellybutt was rubbing her eyes non stop. I thought her eyes were itchy. Then my mom went to her, to give her a clean handkerchief to clean her eyes. Only to find out sthat he was sobbing from far, facing us = ( I went to her and asked her why did she cry. She said " I want to go home. I want to sleep. Mami you carry me to sleep ok? I want to go home eat rice". Oh dear, at this point of time, she wanted to back off from the sports game. I was puzzled why all of the sudden, her emotion changed 360 degree. I asked her class teacher, and she said "she cried because of others are crying too!" @_@ Yeah, I saw a few of her classmates were crying for their parents. I can tell that children's crying is VERY CONTAGIOUS! They follow each others mood! Mau pengsan lah. I've tried to console her and assured her that after the game, we will head back home for lunch and ice cream! 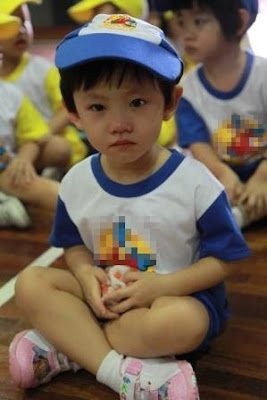 So....after many attempts of coaxing, she agreed to play the game (Spoon Water Game). She was the 1st player in her group, and also the fastest compared to her other team members so she has been doing it twice, during her 1 month rehearsal at the pre-school. But due to her emotion was not stable on that day, teacher get another student to replace her. Worry that she might not want to do it twice, and will ruin the whole game +_+ There were some who still cry while playing the game! They surely have the semangat kesukanan lah! 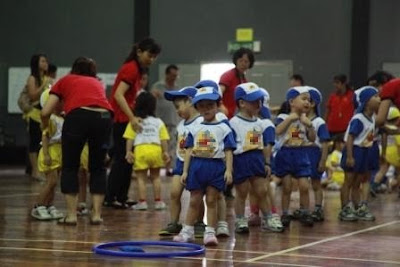 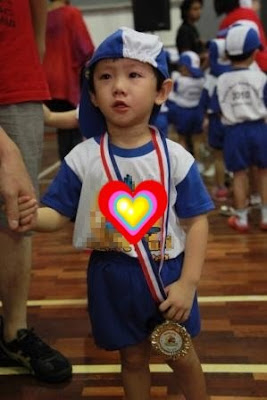 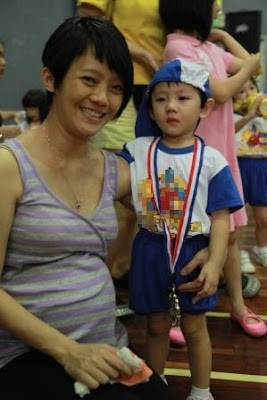 The moment we stepped out from the hall, her mood changed immediately! And willing to pose for the camera too. See the below picture, she can give us her cartoon face again, all back to normal. It was a memorable Sports Day for all of us, filled with lots of fun, laughter and.... crying! :P 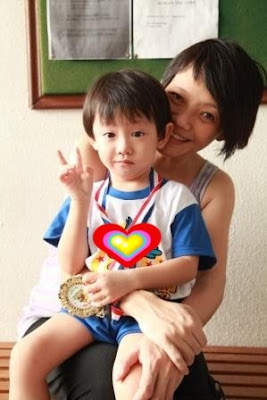