Have you tried 'kai dan wong'?

Here's a yummy dessert with this unique-but-a-bit-tasteless 'nut'. Is it a nut or what? I really don't know. In Cantonese it is call "Kai dan wong" (egg yolk). Grown from a tree, and guess who planted it? The same lui cha sifu from Ipoh =) The tree is pretty big and tall. Normally my MIL will cook this with fu jok barley. Delicious!!!
My mom already prepared a pot of barley (without fu jok) and while cooking it with low fire, we can start to remove the shell. This is how we did it. Not easy though as it has 3 layers in total. Firstly, after rinse the nuts with water (they are very clean actually coz they are from the tree) use a knife to cut on the shell. No need go round the nut, only half the nut will do. We just want to have some opening on the shell so that it'll be easier for us to peel it off later. Then boil the nuts with plain water for about 10-15min. 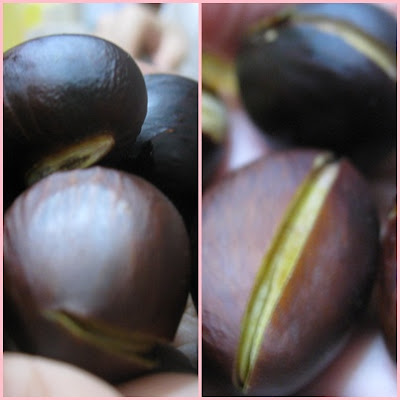 Clockwise from top : 1st layer, 2nd layer, and 3rd layer which is also the thickest. Sometimes I get to peel off all the 3 layers at 1 time. Need some skill here. Otherwise, just peel it layer by layer lah. 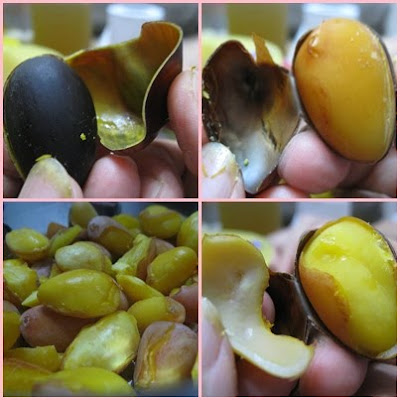 We have a big pot of these nut. Lil Kakak also didn't want to miss out this mega project. So she was seated on her high chair and happily peeling off the 1st and 2nd layer of the shell. 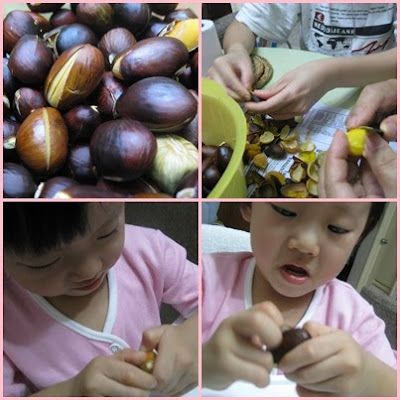 Once we were done with the nuts, boil them again together with the barley for another 15min....and ready to serve. The texture of this 'kai dan wong' is soft. And again, they are tasteless so we got to cook it with sweet dessert. 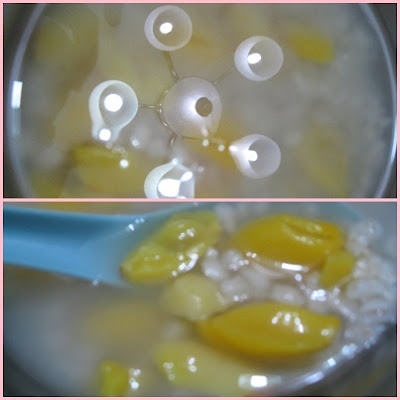 is this the sibling of gingko nuts? rupa sama je

erm, unfortunately I haven't seen their birth cert so I dunno whether they are related or not :P physically, yes =)

We call it 'phang kor'. Can only get from Ipoh wet markets. The shell of the fruit is bright red, velvety like, right? We normally make soup with it by boiling it with chicken. It's a bit bitter right?

Shireen, ya ya it's call 'phang kor'! totally forgotten it :P In KL nobody selling it? then i better plant 1 and start selling haha. bitter? no bitter taste wor. hhmm.. maybe if you cook it with tong sui would taste better.

Mr Pang, too late for u! wait for your mom to cook it for u k :P

this food is unique.