I am a big fan of Hor Por Lui Cha

Before I get to know Mr Pang a.k.a. HubB, I have never came across this type of Hakka delicacy, Hor Por Lui Cha. It's simple (to see :P), healthy, yummy and price wise, ok lah. Best for vegetarian too, if you omit the dried shrimps lah. My first attempt on this full of vege delicacy was back in year 2004. Yeah...during our pak thor time lah. He brought me to a 23hour food court, Pa Ya Thin in Taman Maluri, Cheras. Just like what people normally say, cuba sekali hendak lagi. Boy, it tastes so delicious! So how much does it cost? Tadaaaa....for a bowl of rice with at least 4 types of vege topping + some dried shrimp + some pickled vege teamed up with a small bowl of lui cha soup = RM5 kaaachiinngg!

Actually ar, to prepare this dish really eat your time (makan masa. haha) Lucky me as I managed to witness the preparation of it. One of my Ipoh mari relative who is very good in cooking, has decided to cook this for everyone on the 7th day of CNY - Yan Yat ("Human Day" geezz soli ya...too much of lousy direct translation here due to the lousy blogger).

So here it is....the making of Hor Por Lui Cha in Ipoh.
The most tedious job is to wash at least 6 types of vege and chop them into small pieces, then stir fry them separately. Also need to have dried shrimp, pickled vege and roasted ground nut. 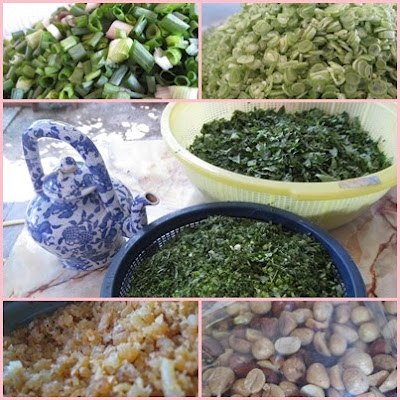 My relative bought this special porcelain vase alike, specially made for preparing lui cha soup base ingredient. The right picture shows the gadget which she uses to pound the ingredients. It is actually a guava tree trunk. Why? Because as a result of pounding, there may be some residue/deposit left over in the pot. By using this guava tree trunk, any residue from it, will be edible! Safe to your tummy =) 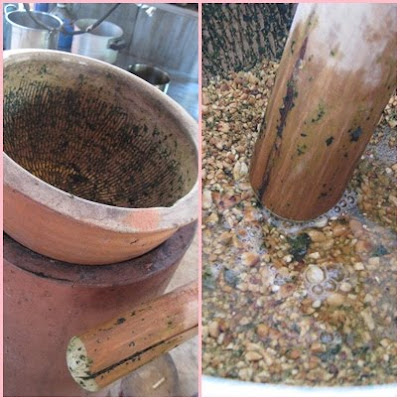 Apart from using roasted ground nuts, there are some other green ingredients, for which I've no idea what do they call it +_+ but 1 thing for sure, peppermint leave is part of the ingredient. While pounding, she will occasionally add some chinese tea into the mixture too, so that the texture is not too thick. But it can't be too watery as well, because in the end, we will just take a few spoon of the greeny paste and mix with some hot water. Then it's ready to serve with the rice and assorted vege. 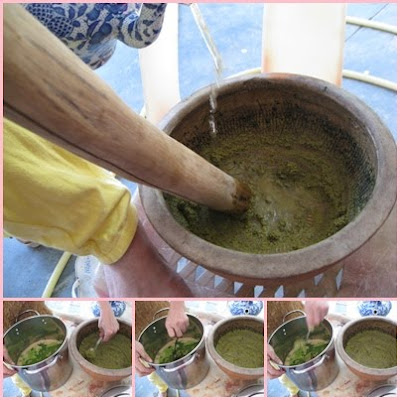 That's her, the sifu behind the scene :) 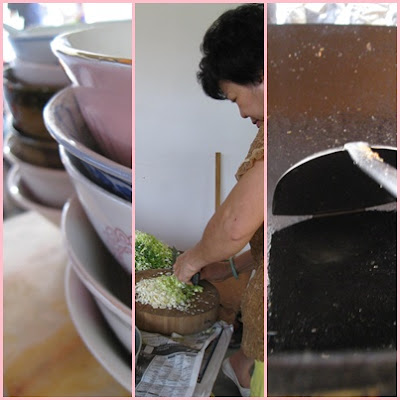 And the Hor Por Lui Cha buffet begins...........eat and eat and top up so many times until I couldn't sleep that nite. For once, I felt like being a cow too, coz whacked too much of vege at 1 time. Haha! 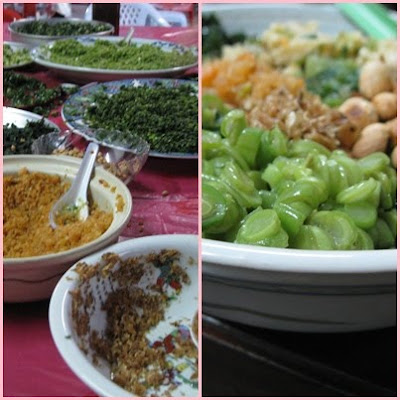 Pei Wei, the one u tried for the first time must be so good until u got so addicted to this dish. I tried once, don't really fancy it as much as u do ...

Hmm..cud be, coz i've tried others and they are not as good as the first 1 too. another good 1 is in kepong.

I love this dish a lot..can make me slim down. Last time I used to take it every week, and the green paste can be use as soup anytime.

this aunty is so capable, can do lui-cha catering.