1 after another....sigh....the year of 2010 is indeed not a very good year for metal monkey, ME. Last month 22nd February, Monday my car got hit by Uncle Botak. Yesterday (also Monday!) some Chinese guy in early 30's and a lady broken into my house at around 9am+. Can you believe it ka, broad day light leh! Here's the synopsis of my Second From Disaster episode.
-THE END-
Aunty immediately called my HubB when she saw them leaving my house with all doors opened. Unfortunately, HubB was in Melaka (he has actually left the house at 4.30am) so he called me to inform me the same. It was 10.30am when I received HubB's call. I rushed back home to check out the condition. Upon reaching my house, I called my neighbour (aunty's son) to accompany me into my house.
The moment I stepped into my house, my first feeling was.....guess what?? I think maybe I've watched too much of horror movies lah. I had goosebumps! LOL! Coz I saw those drawers and cabinet's doors were all wide opened. That scene reminded me of a horror movie Six Sense, starring Bruce William. Hahahahaha.
Ok back to the story. There were supposed to have 2 padlock on my grill. 1 small on the outer, another bigger 1 on the other side of the grill. Only found the small padlock near the window and the bigger 1 went missing. Here's the damage on the wooden door. 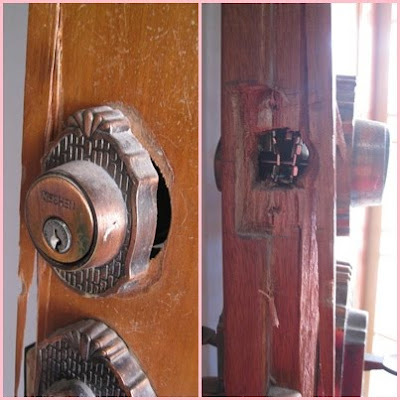 They korek the lock and the whole thing came out. 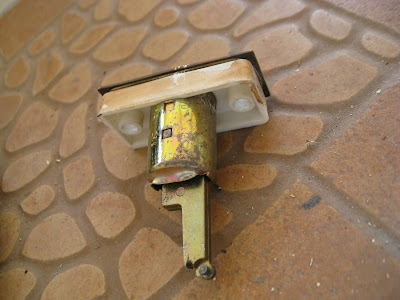 They messed up my downstairs room (also our computer room) and also my master bedroom. The other 2 rooms plus kitchen were untouched. All the locked drawers were (easily) damaged by them. 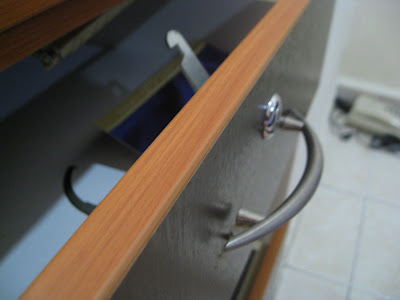 So what did they take away from my house? Some jeweleries, a few pieces only. Also took my thumb drive cum mini player (Creative brand, a very small device, it was a lucky door gift from my office's annual dinner). Itu sahaja. All important documents were still intact. We were quite puzzled as to why they didn't grab HubB's DSLR Cannon O_o. It was kept in a special cabinet (to provide the right humidity level for the camera to avoid it from any "fungus infection"). Anyway, HubB didn't lock that special cabinet. They took it out and left it there. Pelik....pelik.... Maybe he wasn't a camera fan, or maybe he felt that it would be difficult for him to resell it. Hard to resell means no cash. No cash means no fun. No fun means waste of time =) My assumption lah.
After my story-telling session to HubB over the phone, I went out for lunch. Had my favourite pan-mee to cool down and normalize my mind :P HubB can only reached KL at around 2pm+ He told me that I may go back to the office if I wanted to. I told him "it's Ok, I can go to Carrefour for a walk first". Muahahahaha. No lah, I didn't. But I went online instead :P
I really salute them lah, acted a bit infront of my neighbour so that other people might think that they are the house owner's relative or friends. True enough, in the beginning my neighbor also thought that they were my relatives. Drama betul.
HubB and I were quite paranoid with this incident. But we really thank God that none of us were in the house during the break-in. Else, we can't imagine what other things might take place. Slash us with knife or parang?? Raping??? +_+ Scary!! And due to all this, HubB said I must accompany Smellybutt for her field trip on this Friday. Otherwise, cannot go without me. We really do not wish to have anything else happen on any of us again, especially Smellybutt.
HubB will get someone to affix an alarm system for our house this weekend. Although we might be getting our key for the new house next month, HubB said we still can remove that alarm system and transfer it to our new house later.
Let's pray for a better day, and a safer environment for all of us. Dear thieves and burglars, go find a better LEGAL job lah, before God finds you.
Posted by Smelly Butt's Ama at 10:23 AM

Luckily no one is harm. Last week one of a friend also kena the same thing. Teruk lah.. cannot live in peace

sigh...now so scared to stay in the house alone =(

yaaa..the same 'story book' which i've read to u over the phone that day!