For once, in the newspaper 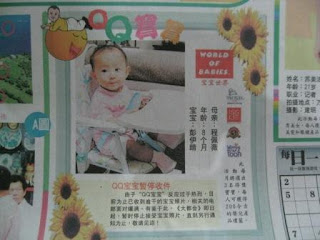 Managed to dig out this picture of Smellybutt, which was featured in Guang Ming Daily, on 14 July 2008 (hey! it is exactly 1 year ago from today!) At that point of time, Smellybutt was 9month old. HubB submitted her photo for the Cutetest Baby Contest, sponsored by World of Cartoon. Each month, Guang Ming Daily will only pick 1 photo to be featured in the newspaper. We were so happy and felt so lucky that Smellybutt's picture was the chosen one for the month of July, 2008 because every month, there were thousands of photos received by Guang Ming Daily for that particular contest. Only 1 lucky winner for the grand prize will be announced by December 2008.

HubB sapu-ded all the copies of Guang Ming Daily from the newspaper stall which he used to patron near his working place on that day. And then he called up his parents in Ipoh, and they bought a few copies of it too!

We are still very happy eventhough Smellybutt didn't win in this contest. The excitement to see her picture in the newspaper is enough :P