Last Thursday, HubB came back from Cameron Highland and bought 2 boxes of strawberry. Smellybutt loves it and she ate quite a lot too. On Thursday night, she poo twice, and again on the next morning. She didn't complaint for stomach pain and she was still very active. We all thought that she might have taken too much of strawberry thus she has to pass motion so many times. On Friday , she poo for the 2nd time in the evening. The texture of her 'output' was very lembik type, and I still can see the 'sausage shape' (sorry for being so graphic :P). Still we didn't suspect anything as she still can eat and drink as usual.
Then on Saturday 1am, she had fever measuring 38 degree. Her fever subsided by 10am. Phew....We really had no idea why did she get fever all of the sudden and the poo poo action before that. Could it be due to the strawberries? Hmmm....
On Sunday morning, she woke up at 7am and first thing she told me was she wanted to poo. She poo quite a lot and released lots of wind too. Luckily it wasn't a watery poo , and she didn't have any stomach pain. Later in the morning, I took her to the Pediatric Clinic. Doc Tan said she had some virus infection on her intestine. It was stomach flu, also known as viral gastroenteritis.

Doc Tan has advised that I shouldn't give her any cow's milk if she continues to poo a lot, meaning if it turns watery. Also she can't take any fiber food, eg fruits and vegetable. He gave me a few sachets of Isomil Plus sample pack. She can only takes soy base formula if symptom persists. Smellybutt was prescribed with this. 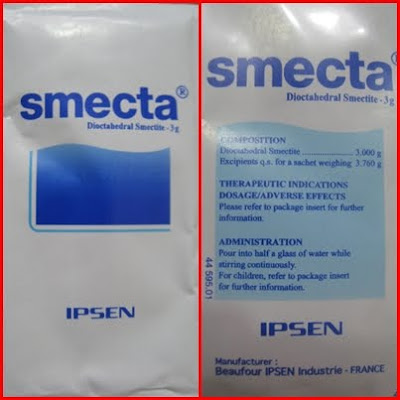 According to the nurse, this powder wasn't a child-friendly taste ubat. Texture is thick after mix with water and taste like 'pasir'. Aiyah, hard to describe lah. When I tried on it, indeed it was suckolingam lah. The nurse advised me to mix it with the soy milk or porridge. First attempt with the soy milk was a failure, as she doesn't like the flavor of soy milk, moreover with the mixture of the 'pasir' feel liquid too. This 'pasir liquid' is to clean her intestine. 1 sachet twice a day. Pengsan :O 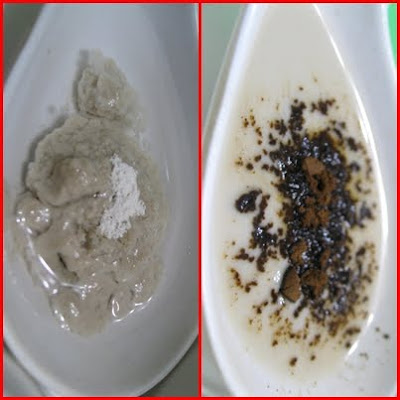 See, the white powder never dissolved in the water immediately. The moment I stirred it, it will look like a small patch of sticky cement mixture :P The right hand picture shows the pasir liquid mixture with 1/2 capsule of Lingzhi powder All I can do was to mix it with some Lingzhi, at least to cover the pasir taste. FYI, this premium Lingzhi has high content of triterpenoids, which makes it taste super bitter. It is 100x bitter than the bitter gourd. Seriously bitter!! While sipping her favorite Lingzhi this round, she paused a while and asked me "meh lei keh?", meaning what was that?! I told her it was your favorite Lingzhi lah, faster finish it! which she did :P 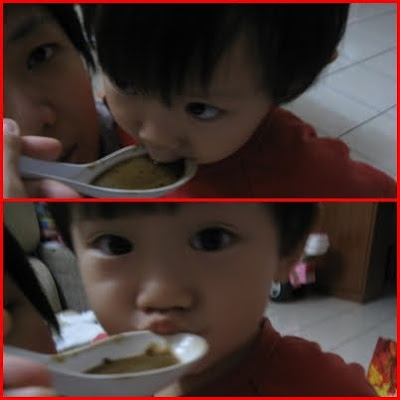 Doc Tan also prescribed her a small packet of pro biotic capsules. This is to promote good and healthy bacteria growth in her intestine, just like how Vitagen/Yakult functions. Her appetite was pretty good yesterday. She ate rice with stir fried chic cubes for lunch, and mee hoon with chic cubes for dinner. Glad that she still can take solid food like usual despite to this stomach flu attack. She poo once in the afternoon, it was a normal poo with shape :) 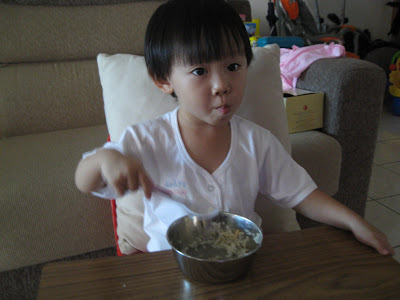 Due to this, she was on medical leave yesterday, declared by mommy. So no school for her on Monday :) Better to monitor her another day, and make sure that she is fully recovered before we send her back to the pre-school. I was a bit worried that she might pass the virus to other kids too, just in case lah.

Really thank God that it was just a mild stomach flu attack.

Strawberries are one of the fruits with the highest level of pesticides. So you have to wash them really thoroughtly. You mean your girl can swallow the bitter ling zhi w/o protesting? Wah, she's good!
BTW, with this new theme, your blog loads faster. Last time, I can hardly leave any comment and have to wait ages to load ur page. I've removed the background from my blog coz it slows down my blog too.

Shireen & Sue : 3 months ago we went to Cameron and she ate those organic (and pesticides free) strawberries. For that round, she didn't have any problem with it. But this round, HubB bought the pre-packed type. Maybe got pesticides and it was not clean enuf agaknya :(

she LOVES the lingzhi very much! so no problem at all when need to feed her any ubat :)

I'm spending my time here for the children of Haiti.

I'm doing this for a non-profit organization that spends their time to
creating an oppurunity for the children in haiti. If anybody wants to give money then then please do so here:

They provide children in Haiti a positive outlook through education.

Please check it out, they are legitimate.

Anything would be appreciated