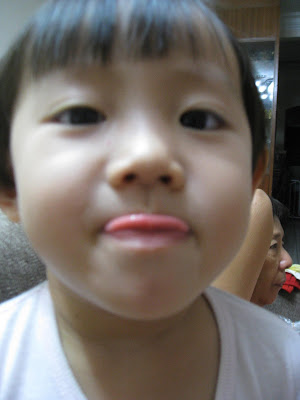 Further to my yesterday's post pertaining to my lil samseng who hit her classmate with a wooden toy block.

Chatted with Teacher Nel again about that case, to find out what has actually happened to both of them. Well, Teacher Nel also didn't know why did Smellybutt hit Thung Thung all of the sudden. But she assured me that it was a pukulan ringan :P thus Thung Thung, the lil Michelin, didn't really felt the pain. Teacher Nel told Smellybutt that she shouldn't hit her friends or anyone too. As a result of that, Smellybutt got punished by her teacher to stand facing the wall. She cried softly :( Then Teacher Nel asked her to say sorry to Thung Thung, which she did. When Thung Thung saw her crying, she automatically went to give her a big hug!! Waaaa so touching leh. Kena belasah and yet still sayang balik that samseng friend. So kind of her!! I want to give Thung Thung a big hug too :)
As soon as I reached home yesterday evening, I casually asked Smellybutt whether did she cry in school ? She said no. Then she proudly declared to me that "I hit Thung Thung" *shake head liao*. After a while, she still repeated that same statement to me again! If I ever said to her "no, you cannot hit your friend", her default answer would be "oi tar Thung Thung" means want to hit Thung Thung. I knew she would say that to me, so I ignored her. But she kept asking me non stop =_= Sigh...shall see what's next today. Hopefully no more drama lah.
Posted by Smelly Butt's Ama at 1:03 PM

She sure is one cili padi!
BTW, I've wanted to ask you for a long time. Why lar, you call your cutie pie smellybutt?

Haha...once upon a time, when I was still in confinement period, the confinement lady call her "chou phi ku" coz she used to 'serve' that aunty and myself her "fresh yellow mustard" all over our body few rounds. hence I call her Smellybutt (translated from that mandarin version)