She bullied her own kind

...and the victim was lil Thung Thung, her classmate. 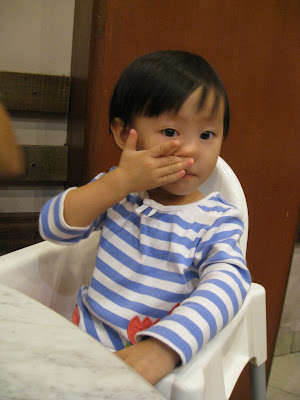 Don't mess with me, if you are not bigger (size) than me! Waachaaa!!

Last weekend, Smellybutt told us that she hit Thung Thung. Popo and I paused a while to digest her statement, whether it makes sense or not. It could!! But on second thought, she might be joking or in another word, lie to us :P When we asked her why did you hit Thung Thung? She didn't want to answer us.
So yesterday, I've managed to have a quick chat with Teacher Nel. I told her about it and need her to verify Smellybutt's statement. Yeah, she did hit Thung Thung =( BUT very very softly. Just a light pat on her, according to Teacher Nel. Why was Thung Thung the chosen 1? Because Thung Thung's size is almost like hers! Small and petite, but Thung Thung is slightly more meaty than Smellybutt. The rest of her classmates are all big size children, so she doesn't want to mess with them. Smart huh. Teacher Nel said she didn't have the intention to purposely hit Thung Thung. Erm...so why in the first place you started it, my dear samseng? 2yr old plus already cari gaduh ka? How many more years you want to gaduh in school leh?

And worst still....my mom has just sms to me that today Smellybutt hit Thung Thung with a wooden block! Popo asked her why did she do that? She didn't answer, instead she cried. Aiyoyo...tonight I need to have a talk with Smellybutt. There must be something behind this. But I really have no idea what triggered her to hit Thung Thung more and more. Any mommy out there had gone through the same scenario?

Besides that, both of them seemed to be pushing each other a bit when they have to que at the toilet. Teacher Nel said it was just a "friendly push" lah, no worry. Also, when Teacher Nel is teaching, Smellybutt doesn't chat with others but she will look up and down, left and right. Tarak concentration =_=

Sigh...I need to talk to Teacher Nel again about this whole drama. Hitting is kinda worrisome for me :(